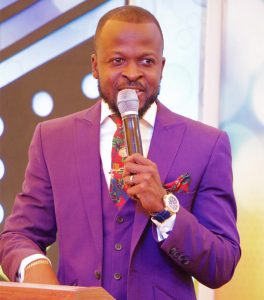 Daniel Amoateng is one of the most dynamic prophetic voices to this generation, firebrand and prolific prophetic preacher with an accurate and cutting edge prophetic mantle. He operates in a sharp word of knowledge, cutting across race and gender coupled with a rare healing and deliverance ministry. His style is radical, revolutionary, innovative and anointed. Called at a tender age of 13, he has jealously guarded his gift with purity of heart, intense fasting and unending prayers. He is a mentor to many youths and ministers as well. He is also the author of one of the best selling Prophetic books: Guarding and Protecting Your Prophetic Word.

Daniel Amoateng is the author of the following books:

Daniel holds a BSc degree in Civil Engineering, and also Masters degree in Construction Management (MSc) from City University, London. He is an Entrepreneur and a Philanthropist. He is the creator of Ghana’s premier smartphone Tourism App called Xploreghana App. He is the President of Daniel Amoateng Ministries and Daniel Amoateng Foundation (DANAF) that has helped orphans and victims of the EBOLA disease in Sierra Leone, Liberia many more countries.

As a motivational speaker, he gives counsel and advice to several government and political figures and have sought audiences with the Presidents and Heads of states of many countries. He sits on the board of many organizations including Tebah Educational Initiative in the USA etc.

Currently based in London, and founder of LONDON PRAYER CENTRE a fast growing ministry. He also oversees Power of Worship International Ministries.

He is a regular conference speaker who has ministered across nations like, UNITED STATES OF AMERICA, Germany, United Kingdom, The Netherlands, Republic of Ireland, Ghana, Nigeria, Sierra Leone, Liberia and many parts of Africa. He is affectionately known as the man who sees.

BOTH #JUDAS and #PETER betrayed #JESUS,however! JUDAS committed Suicide but Peter Repented...no two destinies are ever the same and the future is always different. don’t look at someone and copy them.you are unique and special because of the GRACE of GOD...#amen #click link: http://bit.ly/ReceiveYourPropheticPrayerMantle

A post shared by Daniel Amoateng Ministries (@danielamoatengministries) on Aug 19, 2020 at 6:34pm PDT

A post shared by Daniel Amoateng Ministries (@danielamoatengministries) on Aug 19, 2020 at 3:46am PDT

#PROPHECY FOR YOU: All those that are set for marriage, you are celebrating your miracle marriage this month of August, in JESUS NAME! #AMEN • #Miracle #Marriage #Blessings #Success #Wealth #Goodnews #Greatness #MaritalBlessings #SeasonNow

A post shared by Daniel Amoateng Ministries (@danielamoatengministries) on Aug 18, 2020 at 8:54am PDT


Click on the link below to get our latest ebook titled:
Overcoming Fear